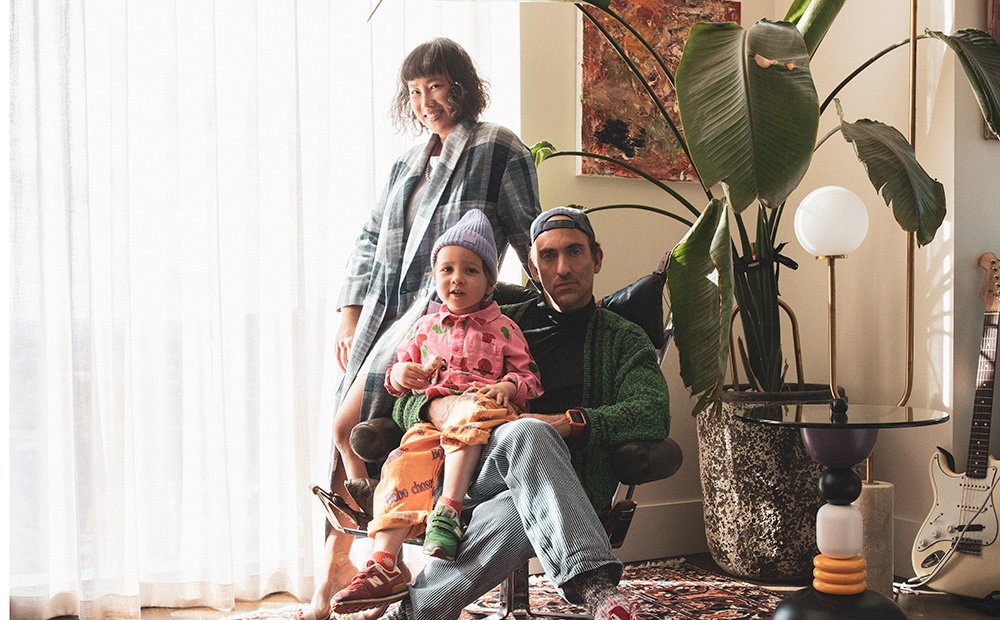 Move to the city to enjoy extraordinary everyday living.

Lighting designer Michael Chazan had never considered living in an apartment until he met his now wife Ying Ang.

Having spent most of her adult life flying around the world for work as a documentary photographer, apartment living had become the way of life for Ying, who valued the convenience of being able to lock up and leave at a moment’s notice.

‘When we decided to make a home together we resolved to do it in Melbourne, but in an apartment, as dipping in and out of town was still a big part of our lives and the relative convenience of apartment living was undeniable,’ Michael said.

‘Despite this, I was initially sceptical about many other aspects of the apartment lifestyle and as such aspired to get a house somewhere as our family grew.

‘Somewhat ironically, it was only with the birth of our son Oska Shübi that I really became an inner-city apartment convert.’

A three-bedroom apartment at the top end of town on Spring Street is now home for the young family who ‘loves feeling entrenched in a vibrant, diverse and stimulating community’.

‘The city is a melting pot and exposing our family to such cultural and experiential diversity in the course of our daily routines is something we really value,’ Michael said.

‘Over the years I have enjoyed living in many suburbs in Greater Melbourne, but often found a certain homogeny to them. Living in the heart of a metropolis like Melbourne tends to expose you to a more diverse set of people and more fluxing set of experiences.

‘As our son grows, it has also been amazing to see him claim the city’s streets as his own urban playground. To me it seems like a pretty amazing and stimulating environment to grow up in.

‘During lockdown, the centre of Melbourne has taken on an altogether different feel. It has been interesting to see neighbourhoods transform and embrace this new identity.

‘Likewise, the way we engage with our environment has changed too and we have found ourselves venturing to parts of the city we had not previously explored.

‘As a consequence, we have stumbled across some favourite new little spots, like Bakemono on Drewery Lane, where we get our daily coffee and pastry fix.

‘After our morning coffee, we usually wind our way up to the courtyard of the Melbourne Museum, where Oska Shübi likes to skateboard.

After that we might grab a banh mi for lunch and debate where our afternoon adventures should take us – Fitzroy Gardens, the Botanical Garden, the Tan, or a meander along the Yarra.

‘Then at night, we head downstairs to grab some amazing food. Even though eating out hasn’t been an option lately, eating at home overlooking the city skyline isn’t such a bad back-up plan.’

And while their apartment is adorned with Ying’s photography and Michael’s bespoke furniture and lighting from his design studio, Moda Piera, it’s also the urban masterpieces they can see from their windows that makes their space like no other.

‘We’re incredibly fortunate to have an amazing view across some of the most beautiful and iconic parts of Melbourne. From our windows we look directly on to Treasury Gardens, Parliament, the Royal Exhibition Building, the MCG, and all the way out over the Dandenong Ranges,’ Michael said.

‘We are also really lucky that some of our favourite bars and restaurants are literally downstairs from us: Kenzan, Cecconi’s, Cumulus and Di Stasio Citta are all within a 30-second walk from our front door and we are glad to now call many of these people our friends.

‘One thing people might not think about living in such a big city, is that there is a real sense of community. We have so many local cafes, bars and restaurants where we feel like part of the furniture.’

Suffice to say that after a reluctant start to apartment life, Michael now finds it difficult to imagine living any other way.