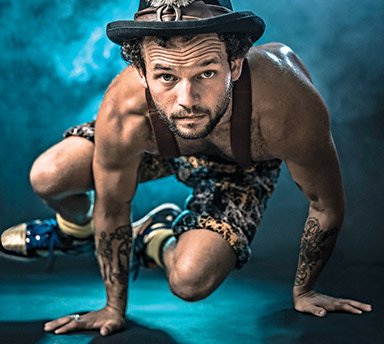 ‘YIRRAMBOI is an opportunity to lead the world in showcasing First Nations arts, making Melbourne the destination for exchange and collaboration,’ Jacob said.

‘We’ve got mob coming from all over the country, as well as First Nations people from Canada, New Zealand, the Pacific Islands, the United States, Taiwan, Finland, Wales and beyond.

‘This festival isn’t just about buying a ticket and seeing a finished show. Instead, audiences can meet artists in action, play with them and reshape the language we use around Indigenous art and culture.’

YIRRAMBOI which means ‘tomorrow’ in the shared languages of the Boon Wurrung and Woi Wurrung people, will be brought to life by a myriad of presenting partners, including the Circus Oz BLAKflip program.

‘Open your mind. Walls are being built around the world, so we need to be braver than ever.’

‘I love flying through the air,’ Dylan said.

‘Circus is skill, daring feats of strength and bravery meets tricks and comedy. It’s a vast and flexible art form and we train hard core. The mystery is what makes it so magical. So prepare to be bewildered.

‘We all want to see BLAKflip grow to a point where more and more Indigenous artists can find their voice and express their culture in front of an audience. That’s the dream.’

Other YIRRAMBOI program highlights include a full moon electronica dance party at Federation Square and Barring Yanabul, a city-wide ‘treasure hunt’ of performance. A Leaders Summit and five-day Creation Lab will also encourage artists to experiment and collaborate.

On the last day of the festival, new babies will be welcomed to country at a smoking ceremony on the banks of the Birrarung, or Yarra River.

Jacob invites all Melburnians to dive into the expansive program and discover something new.

‘Erase all the language you’ve developed, or heard in the media, around Indigenous arts and culture,’ Jacob said.

‘Those old ways of talking don’t apply to YIRRAMBOI. Open your mind. Walls are being built around the world, so we need to be braver than ever.’

YIRRAMBOI is presented in partnership with Creative Victoria.