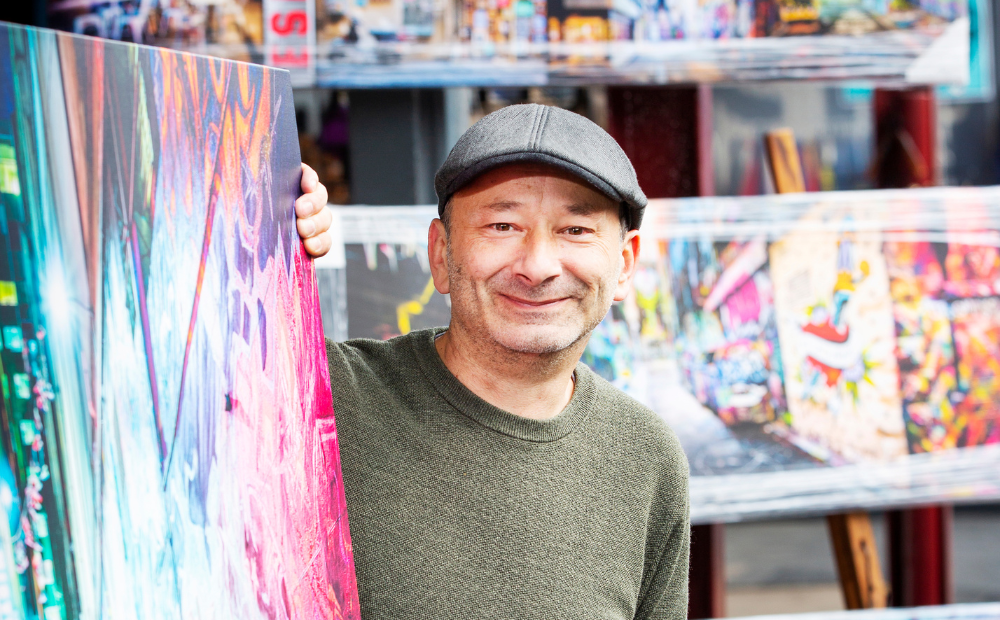 Everyone knows you can find almost anything at the Queen Victoria Market and Tony Pierrakos started with hammocks.

‘I first started working at the market around 1999, working with a friend selling Mexican hammocks,’ Tony said.

‘He had a great business, so I did that for about two years, then I said ‘let’s be serious, I’m a photographer’!’

More than 20 years later, his photography business has shown Melbourne in all its moods – and is a recipient of a Lord Mayor’s Small Business Award.

Tony shoots the images and then displays them at the market, selling them to people from all over the world seeking a memento of Melbourne.

After his first few years working from a market stall, he moved to the String Bean Alley when it opened with its repurposed shipping containers.

‘That’s when it felt like a little art gallery. Customers really took me seriously as an artist there.’

As a boy he was taken often to the busy market by his parents. A birthday present of a camera set him on the path to telling countless stories through images.

His subject matter ranges from urban to regional, taking in the Yarra Birrarung river, the MCG and city laneways as far afield as the Otways and also some European locations.

Customers arrive from all over the world.

‘One of the best parts of my job is meeting all the great customers. They just want something to remember Melbourne by,’ Tony said.

‘When you get someone from Paris saying how much they love Melbourne, that’s a special thing to hear. We are blessed with such a beautiful city and they just want a photo – maybe a skyline or Hosier Lane.’

‘Also, if you have a relative overseas and you’re going to visit them you might want to give them a gift, such as an image of Melbourne.

‘People coming from Perth to see a footy game might pop into the market and want to get a souvenir too. At the same time people look for art work for their house that’s nice and affordable, so I get locals, regional, interstate and overseas customers.’

Composing scenes over the decades, he’s seen numerous changes in the city he knows so well.

‘The laneways, restaurants and coffee shops, street art and murals, all came to life,’ Tony said.

Yet by 2020, Melbourne retailers were hit hard when the pandemic began. So Tony found a way to keep an idea alive.

His book STILL Melbourne is a collection of photos taken during the lockdowns when Melbourne was hard to recognise, its streets and shops almost deserted.

‘I had to do something so I just combined walking and exercise with taking photos and I thought it’s something we’ll probably never see again in our lifetime.’

‘I wanted to stay connected with my Instagram followers, so every week I went out and took photos and people really loved them.’

Back at the market between lockdowns, his photos caught the eye of bookshop owner Jaye Chin-Dusting.

The result? The two collaborated on the book STILL Melbourne, a fine record of an extraordinary time.

Tony found the beauty in the bones of a city that would survive the downturn and recover.

‘It’s not sad – it’s not a book about the lockdown, it’s a book made during the lockdown. There are empty streets but there are beautiful images too. It’s been a dream come true for me.’