Rudely Interrupted rocks out in lockdown 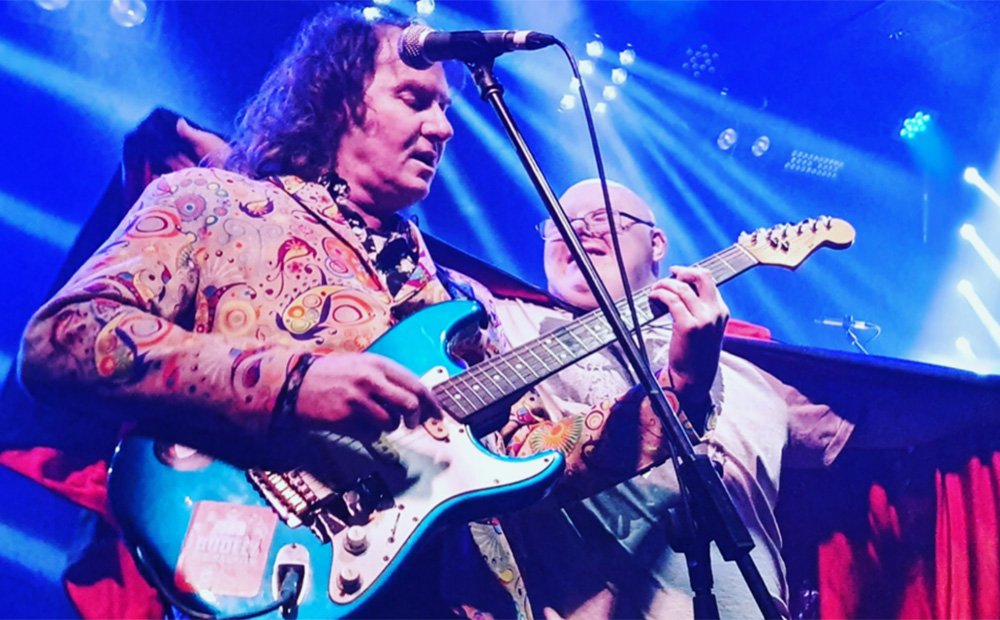 Rock band Rudely Interrupted has been creating new tunes during lockdown with the support of a quick-response arts grant.

We awarded the small grants in March to help local artists continue creating during COVID-19. Rudely Interrupted was among 75 recipients who identify as living with disability.

Rudely Interrupted has performed pop-rock anthems across the globe since 2006, achieving 14 international tours, five studio albums and even an AFI-nominated rock documentary.

What inspired you to found Rudely Interrupted, and what do you love about the band?
I was a late starter to music, and drums were my first instrument. I’d always had a passion for rhythms and I recall playing on my desk at school and probably being told off. I guess my parents didn’t want the noise of a drum kit, so I was given an acoustic guitar, but I’d go around to my mate’s house and play his drums.

I worked hard on my instrument and eventually joined a band, and my passion for music, performance and the opportunities to involve myself in the music community grew with that. I met other musicians, we played gigs together and started recording, and playing local shows. I threw myself into my music and worked hard on learning and connecting where I could.

Eventually we started to record our songs and send out demo tapes and chase gig opportunities. I met some like-minded folks and gained some lifelong friends from those early music days in the ‘90s. Being able to connect with other bands and fellow musicians eventually took me on tour, releasing records and performing internationally with Melbourne band The Anyones, touring the USA supporting bands like JET, The Killers, Morrisey and many other acts.

I was working in the disability sector holding music programs to make ends meet, which gave me the flexibility to tour. I loved the lifestyle and worked hard.

How did you meet lead singer Rory Burnside?
My good friends were recording with renowned music producer Jonathan Burnside so I was hanging in the studio. I mentioned I worked part-time in disability and Jonathan said I should meet his son Rory. Rory was very musical, and lived with Aspergers and was born without eyes. I was invited around for a barbecue and to meet Rory.

Rory is a fascinating guy, very clever and I was taken aback by his musical talent. I went back to work and started a band for musicians living with disability and asked Rory if he’d like to join. He jumped at the chance, although it came with its challenges as not all the musicians in the group were as musical as Rory.

We’ve developed a strong friendship over the years and I think we’re both truly grateful to experience this musical life together.

What struck me was that Rory was a lot more talented than many, but would otherwise struggle to gain the opportunities I’ve had because of his life challenges. I set about trying to create a few opportunities and see what would come. Fourteen years, 12 international tours, 10 countries, two albums and three EPs later, I guess it was meant to be.

How has COVID-19 affected Rudely Interrupted?
Obviously we can’t perform together, or to a public audience, and it has put a stop to our musical lives. As we were full-time musicians it impacted greatly on our income and we’re still in the midst of trying to find a way back to business.

Thankfully, we live in Australia, we have a system for support. Having toured so many countries, not all of them have opportunities of support for their people and we’re truly grateful for the financial support available to us as Australian citizens.

We have a wealth of experience behind us now and we still really believe in our music and each other and can’t wait to get back in the pubs and clubs performing and connecting with our fans and fellow musicians.

We love Melbourne, and the music and arts community around it, and want to thank the City of Melbourne again for the grant.

To learn more about the City of Melbourne’s commitment to access and inclusion, check out our Disability Access Plan.