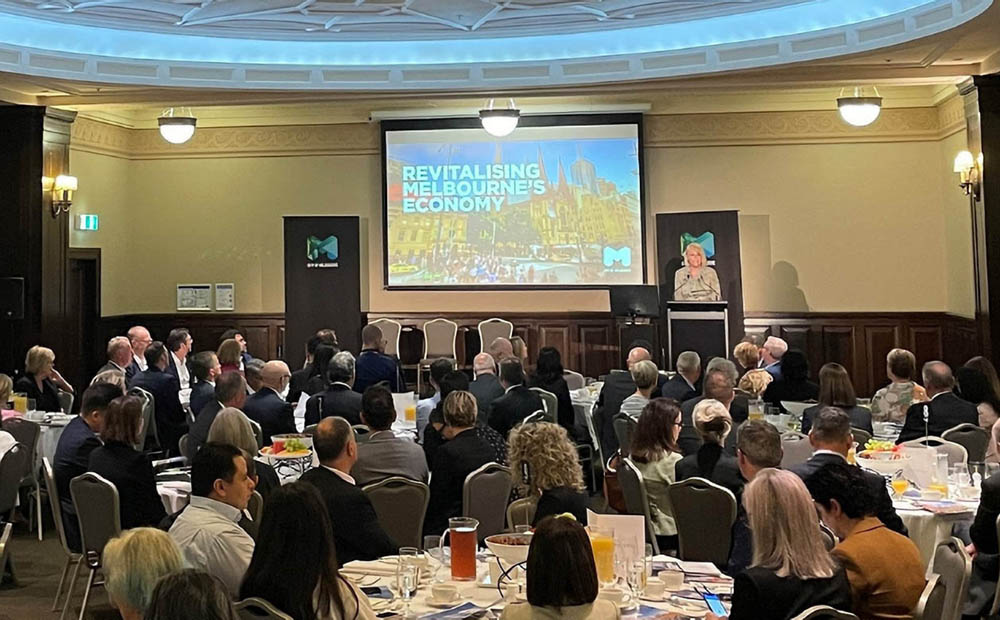 Lord Mayor Sally Capp has addressed an audience of more than 100 prominent business leaders at the Revitalising Melbourne’s Economy Business Breakfast in March 2022.

In her speech, the Lord Mayor acknowledged the great efforts businesses have made to survive during the pandemic, to support their teams, pirouette, partner and thrive now that Melbourne is open again. She spoke about Melbourne as a city of possibility that draws people together, and invited the attendees to feel energised and excited about the city’s future.

Here’s what the Lord Mayor had to say:

Many predicted the death of Melbourne during our darkest days of lockdown. We were tipped to become a ghost town, the hole in the donut, redundant… but I can assure you that Melbourne is bouncing back with a vengeance.

We will build on our strengths as Australia’s best Central Business District and Central Entertainment District combined. Some cities are deciding to be one or the other. We know that investing in our CED offering, supports our CBD and vice versa.

Everything we have done over the past two years and everything we continue to do is to revitalise Melbourne’s economy.

I was at Moomba over the weekend and it was absolutely pumping. I’m thrilled to reveal today that we broke the record for the biggest ever Moomba crowd to come into the city. More than 1 million people attended Moomba across the four days.

Our research last year told us that people were eager to get back to the city once they were vaccinated. They told us they were nostalgic for events and experiences that they had missed over the past two years. And so far in 2022 the research has been prophetic. People are flooding back into the city if we put on events and activations that earn their commute.

Moomba 2022 was exactly what our city needed – a chance to come together and celebrate our diversity, thriving creative scene and unbreakable community spirit.

And we, along with many of you, are doing what we can to make sure the crowds continue to build in Melbourne during March and throughout autumn.

Last night I was at the ‘G for the launch of the men’s AFL season and it was roaring. Our traders and city workers are delighted to have five games in five days here in the city

We are focussed on making sure that the momentum continues to build into and through winter.

This is particularly important because some health experts are tipping case numbers to rise in winter. We must build our COVID confidence and ability to live with COVID before that happens so that we can thrive through winter rather than hibernate at home again. We can’t afford another pause.

We know the impacts of the past two years have knocked us, and our economy, around, but now is the time to be ambitious.

We are taking meaningful action towards a swift and strong recovery.

To kickstart the city, we’ve focussed on the Central Entertainment District to build visitation and COVID confidence and undo habits formed during lockdowns.

We successfully negotiated a $300 million joint recovery and revitalisation initiative with the Premier and Treasurer Pallas to bring the buzz back.

We’re also making sure the city is clean and inviting for workers and visitors. We’re in the midst of our biggest ever graffiti blitz. We were successful in advocating for free public transport in January to build confidence in the system that will bring the most people back into the city.

This effort and investment improves Melbourne’s offering as a Central Entertainment District and it also builds on our position as a Central Business District. It continues to underpin our growth and prosperity by earning the commute of our city workers, students and visitors.

Richard Florida, the high-profile American urbanist, writes about the clustering force – the clustering of people and productivity, creative skills and talents that powers economic growth.

There is nothing quite like the scale, serendipity and stimulation that is only possible in a capital city working environment, and Melbourne is truly extraordinary when full of people sharing ideas and working together.

We developed a 10-year Economic Development Strategy to guide how the city will reactivate our CBD.

Our city forecasts have been independently reviewed and we feel confident Melbourne can grow to become a thriving $150 billion economy over the next decade.

This independent assessment sets targets that we are now working to deliver.

But there is still some work to do to achieve these targets, and we cannot do it alone.

COVID has altered our city’s rhythm and these plans and partnerships will turbocharge our recovery, transform our economy and ensure Melbourne remains a magnet for talent, investment and growth.

Prior to COVID, we had one of the world’s most competitive economies, we were the engine room of the state and fastest-growing city in Australia, fourth in the developed world.