Melburnian of the Year: Neale Daniher AM 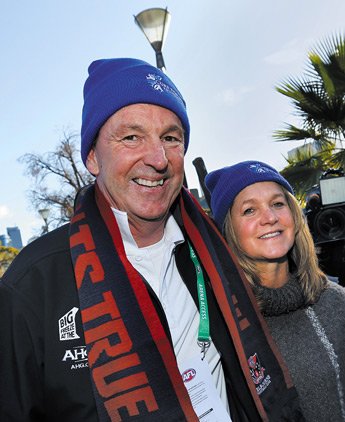 Christmas is a time to spread hope and give back, something second nature to charismatic football legend and Motor Neurone Disease crusader Neale Daniher AM, our 2016 Melburnian of the Year.

In 1990, four brothers from the bush made history, playing together for Essendon Football Club. Excellence is a family affair for the Danihers. Neale went on to coach Melbourne Football Club and be assistant coach for the Essendon and Fremantle football clubs, winning widespread praise on and off the field.

After his diagnosis with MND three years ago, a disease that causes progressive paralysis and is currently incurable, Neale dedicated himself to raising awareness and funding for research. He became Vice President and Patron of the Cure for MND Foundation.

‘MND can’t be resolved by chemotherapy, radiotherapy or surgery,’ Neale said. ‘The only way is to find a compound that helps the motor neurone survive, and that is one of our major projects.’

‘Our aim is to bring clinical trials to Australia, by Australians, for Australians. It’s all about bringing hope to what was a hopeless cause.’

Despite humble goals of raising $250,000 through the Foundation’s inaugural Big Freeze, an event that plunges celebrities into icy water at the Melbourne Cricket Ground, Neale and the Cure for MND Foundation delivered $3 million in 2015 and $6 million in 2016. Daniher’s Drive, a road trip extravaganza across country Victoria, has also received overwhelming public support.

‘It’s all about bringing hope to what was a hopeless cause.’

Known for his spirit and generosity amidst adversity, Neale’s message for anyone doing it tough this festive season is one of compassion and empathy.

‘Life isn’t fair. I know that. But even with that backdrop, life has a lot to offer,’ Neale said. ‘Focus on the opportunities that life gives and there is always an opportunity to help other people.’

To support the Cure for MND Foundation you can buy a beanie, back the Big Freeze, run your own fundraiser or even hit the road in the next Daniher’s Drive.

For Neale, recognition in the Awards strikes a chord with his love for Melbourne as multicultural, fun-loving and the sporting capital of the world.

‘I feel very special to have been named Melburnian of the Year. It’s a great honour, it’s a great city and I’m chuffed to accept.’

By a Corporation: Victorian Opera

By a Community Organisation: Melbourne Festival

By a Corporation: Herald Sun / Citylink – Run For The Kids

By a Community Organisation: Creativity Australia

By a Corporation: Zoos Victoria

By a Community Organisation: Market Forces

By a Corporation: Indian Film Festival Of Melbourne

By a Community Organisation: The Huddle