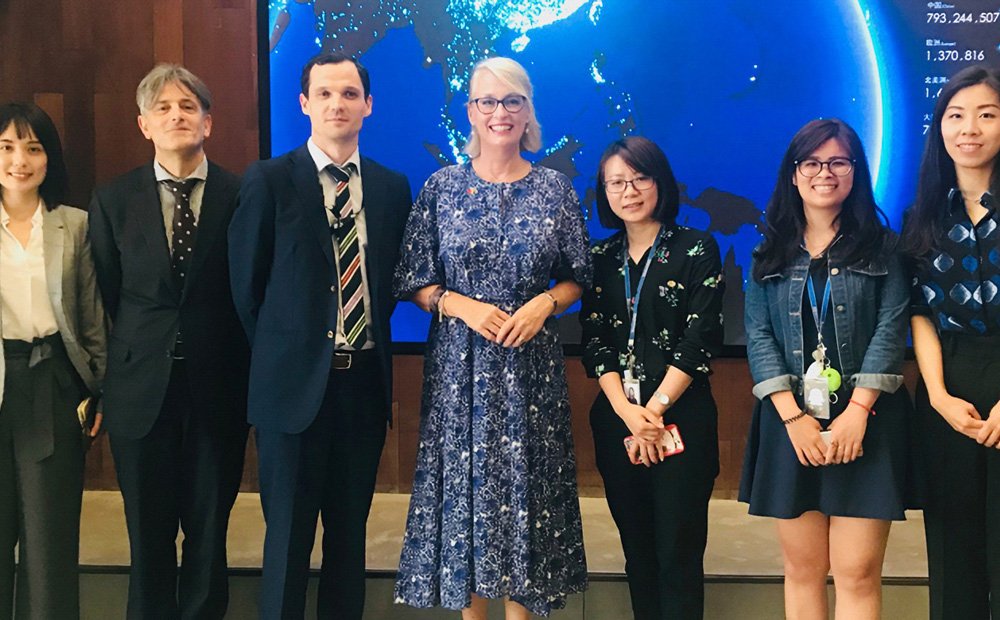 Lord Mayor Sally Capp showcased Melbourne as an innovative and global city with a dynamic start-up culture in her recent trip to Indonesia and China.

Over 10 days, the Lord Mayor visited Bandung in Indonesia, and Guangzhou, Nanjing, Tianjin and Beijing in China.

Indonesia is predicted to be the world’s fifth largest economy by 2030, and it is an important trading partner for us in sectors such as science, technology, innovation, the arts and education.

China is Australia’s biggest trading partner, Victoria’s biggest market for tourism and international education, and the largest founder of startups in the world, which contributes $75 billion to the global economy.

‘We were well received by very senior government officials in both countries, reflecting their respect for Melbourne and the depth of our existing relations,’ the Lord Mayor said.

‘Strengthening relations with Indonesia and China is vital to advancing Melbourne’s prosperity, and I have come home with lots of ideas.’

‘In Indonesia, I learnt about Bandung’s smart city approach including speaking with command centre staff about how they collect and use big data to improve city operations.

‘With a young and tech-savvy population, Bandung is one of Indonesia’s top three smart cities and I was pleased to sign a letter of intent to enhance cooperation between our cities.

‘I also enjoyed speaking with the finalists of our jointly-run open innovation competition, who shared their great ideas for how we can tackle common city issues such as safety, transport and accessibility.’

Did you know
Victoria and Jiangsu province have been sister states for 40 years, and almost 52,000 tourists come to Victoria each year from Jiangsu. The City of Melbourne also has an office in our sister city of Tianjin.

In China, the Lord Mayor met the Mayor of Guangzhou Wen Guohui, officials from WeChat and China Southern Airlines, the Australian Consulate General, and other key business contacts and senior officials.

In Nanjing, the Lord Mayor attended the Nexus Startup Summit where Melbourne startups presented their ideas on a global stage, building on our work to establish Melbourne’s Jiangsu-Victoria Innovation Centre in 2017.

‘Our startups presented their business ideas to judges and potential investors in a pitch competition that focussed on the Chinese market. The winners received $100,000 in cash and targeted assistance to help them scale up their business,’ the Lord Mayor said.

‘The startups also participated in a business-matching session where they met with potential investors and partner organisations to further hone their ideas to suit China’s market conditions.

‘The summit has already produced between $800,000 and $900,000 of direct benefits for Melbourne and Victorian startups when you consider sponsorship, prizes and committed funding.’

The Nexus Startup Summit will become an annual event, and will be held in Victoria next year.

She also co-hosted a Mayors’ Dialogue, bringing together mayors from Victoria and Jiangsu to discuss shared challenges and solutions.

In our sister city of Tianjin, the Lord Mayor delivered a keynote speech at the third World Intelligence Congress and met with representatives from the Tianjin Government Leaders Training Program, which has given nearly 400 Chinese officials the opportunity to visit our city and become advocates for Melbourne.

‘It was pleasing to see how senior officials in Indonesia and China gave their strong support for greater economic engagement with Melbourne.’

To hear more from the Lord Mayor about her trip to Indonesia and China, check out her videos on YouTube.

Fast fact
Melbourne is amongst the top five fastest growing startup sectors in the world, currently valued at $1.6 billion. If we can further globalise this vibrant sector, this value could more than double, to $4.5 billion. To find out more, visit Startups.

Further insights from our councillors

More than 30 per cent of international students living in Melbourne come from China, so it’s an incredibly important market for our city.

Our participation in global forums helps to promote Melbourne as a great place to study and live.

Council has built up a strong network of international trade and government connections over many decades.

We have helped facilitate the signing of memorandums of understanding so local businesses can engage in global trade and knowledge sharing opportunities.