How to make high-tech gadgets free for everybody 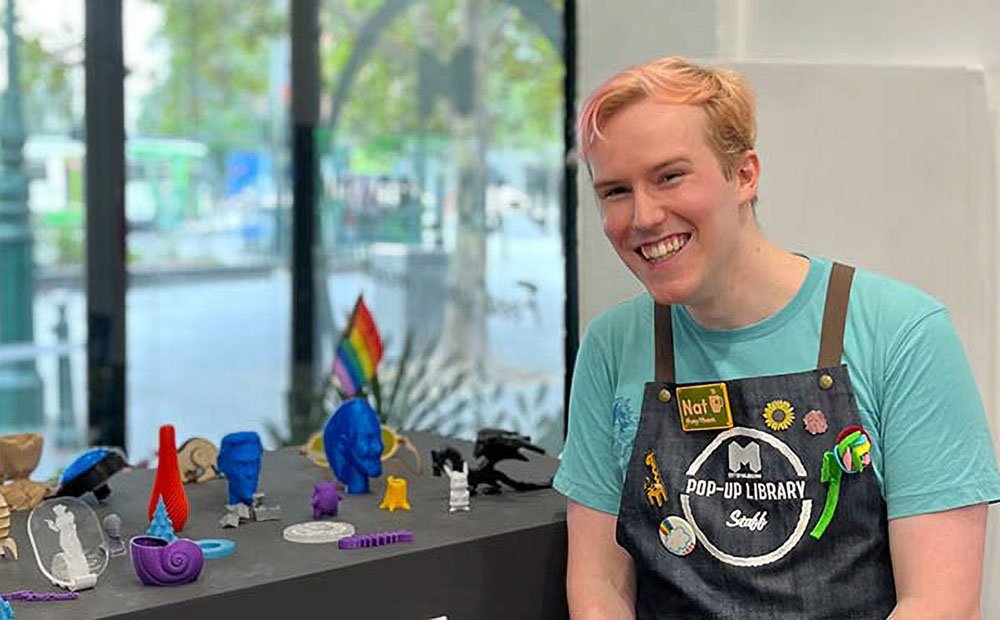 High-tech gadgets shine at a pop-up library and make-it space opposite the Queen Victoria Market.

It took just two months for Nathaniel Bott and their team to fill an old Chinese restaurant with cool gadgets.

True to the aspirations for the make-it space in the new pop-up library, Nat created a 3D flythrough of the venue before bumping into the empty space.

‘The flythrough helped me visualise where everything would go. I also ordered the equipment. That was fun,’ said Nat, a creative technology activator.

The badge maker is strategically placed at kid level. More complex machines – such as the sewing machine, 3D printer and obelisk-like laser cutter – are kept around the corner and away from little fingers.

‘Each piece of equipment on its own is expensive. Too expensive for many to own. So we bring it all together in the pop-up space and make it free for anybody to use.’

Not sure where to start? Nat is ready to talk you through it all.

Overlock a frayed hem. Monogram matching bathrobes. Sew new cushions. Summon a reticulated octopus from orange filament. Auto-embroider a patch for your bag. Lend gravitas to a photo by imprinting it on plywood.

Waiting to be borrowed are real-world coding kits like MaKey-MaKey – which can turn a banana into a space key – and DJ equipment such as Ableton Live for aspiring musos to test out.

Chess enthusiasts from the nearby Drill Hall social housing complex have helped Nat to enhance the laser-cut chess sets that sit on tables by the window in the pop-up library. 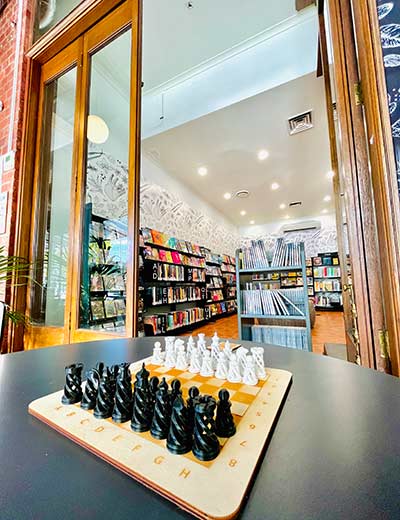 A chess set created in the new pop-up library

Among the many chess pieces is Nat’s first-ever foray into 3D printing, a rook they designed 10 years ago while at high school in Tasmania.

One rook, and they were hooked on the idea of working with creative technologies

Nat parlayed a Launceston internship into a game design degree at RMIT. Freshly graduated, they tumbled into a role in the makerspace at Library at the Dock before being seconded to the Elizabeth Street pop-up.

‘I’ve found a creative job that matches my weird and varied skillsets.’

‘People ask us when the pop-up is ending and I tell them that there will be a new library in the area soon, and it will have a bigger makerspace.’

We are indeed developing a new community library at the Munro site, in the Queen Victoria Market precinct. The facility will feature a creative makerspace, library and children’s library. Family Services and a community rooftop terrace are also on the plans.

‘It’s exciting and lovely to chat to people who will love and appreciate a new library in their neighbourhood. Hopefully I’ll be part of it,’ Nat said.

You can find out more about new library at the Munro site opposite Queen Victoria Market.

Feed your mind with an amazing array of best-selling books and access to wi-fi, as well as the bespoke make-it space at the Elizabeth Street Pop-up Library at 510 Elizabeth Street.