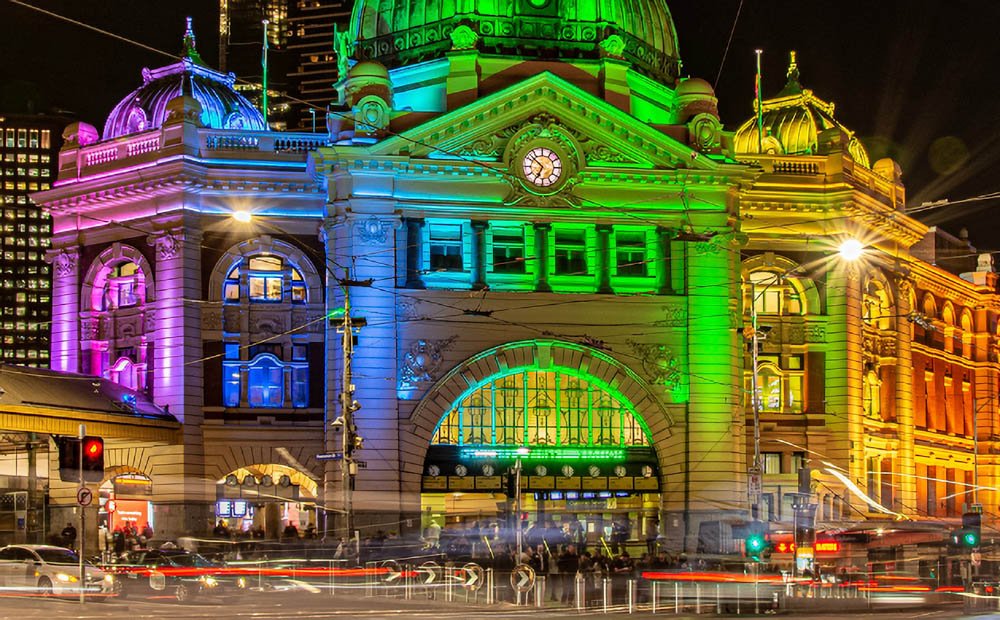 Immerse yourself in tall tales of old Melbourne and spot historic sites as you rediscover the city this summer.

Here are some quirky stories about the city’s colourful past.

Stroll down Swanston Street to follow in the footsteps of Australian music royalty. In February 1976, AC/DC rode down the street on the back of a flatbed truck to film the music video for It’s a Long Way to the Top (If You Wanna Rock ‘n’ Roll).

If you’re a music fan, snap a selfie with Bon Scott in AC/DC Lane (off Flinders Lane between Russell and Exhibition streets) and download the map for our Melbourne music walk. Or find out more in Five stories behind Melbourne laneways.

Pause to take in the 20-metre scroll-like structure in Burston Reserve that represents the Great Petition. With more than 30,000 signatures, the petition was evidence of widespread support to give women voting rights in Victoria. It was presented to Parliament in September 1891. Learn more in our International Women’s Day article: Explore 10 places that honour women.

3. Meet you under the clocks… in Mumbai?

Have you heard people say that Flinders Street Station’s distinctive Edwardian design was meant for Mumbai’s Chhatrapati Shivaji Maharaj Terminus? The legend goes that the two designs were accidentally swapped, and Mumbai ended up with a gothic-styled station.

Melbourne is a UNESCO City of Literature and its bookish culture goes way back. In the 1900s, Bourke Street Mall was home to the world’s biggest bookstore: Coles Book Arcade. The store had masses of books, toys and curios over multiple levels, as well as a fernery, a live pianist, funny mirrors and monkeys.

Did you know The Story of the Kelly Gang, the world’s first full-length feature film, was made in Melbourne in 1906? Produced on a budget of £450, this biopic of the notorious bushranger opened at The Athenaeum Theatre on 26 December the same year.

Over the years, many more films and TV series have been filmed on our streets. In recent months, parts of a 10-part television adaptation of best-selling novel Shantaram by Gregory David Roberts have been filmed in our municipality. Learn more about Filming in the City of Melbourne.

Imagine children riding ponies on a city rooftop alongside carnival rides and a petting zoo. Visitors to the annual fun park atop the Foy & Gibson department store (once located on the corner of Swanston and Bourke streets) recall a Ferris Wheel virtually hanging over the side of the building.

The closest Elvis got to Australia was Hawaii, but you can still get all shook up at Melbourne General Cemetery’s shrine to the King of Rock and Roll. Believed to be the only authorised Elvis memorial outside the USA, this landscaped grotto was unveiled by rock legend Johnny O’Keefe in 1977.

Hosier Lane is said to be one of the most haunted spots in the city. People have reported seeing a male silhouette and feeling an icy presence. Some say the spirit is Frederick Bailey Deeming, a Jack-the-Ripper suspect who was hanged at the Old Melbourne Gaol in 1892.

9. Tales of a vintage rooftop

Imagine enjoying tea and scones amid an exotic garden on the rooftop of the Manchester Unity Building in the 1930s. The art deco gothic landmark was once the tallest building in Melbourne and its rooftop terrace hosted Melbourne’s first tea-rooms against a magnificent backdrop of city views.

Keep an eye out for the friendly resident ghost of Frederick Federici at the Princess Theatre. The opera singer died from a heart attack after sinking dramatically through a trapdoor at the end of the opening night of Faust in 1888. More than 130 years later, the theatre still saves him a seat.

For more information about interesting places to visit on foot around the city, visit Walks.