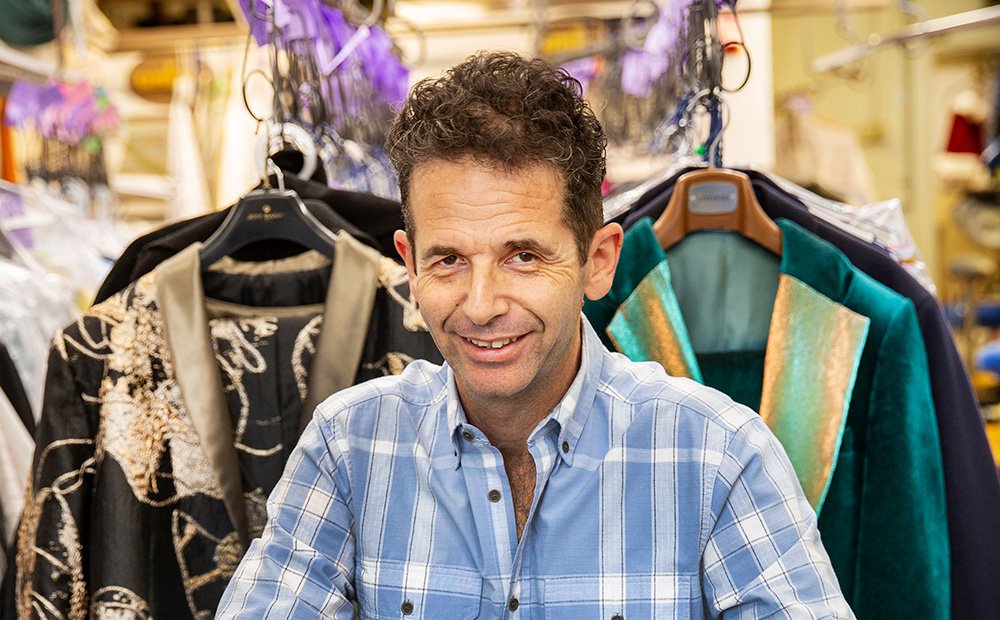 John Athanasiou jokes about working in a small shop space, but vast, bejewelled worlds crowd into this dry-cleaning business.

Precious costumes from Frozen, a gown from Kylie Minogue – all find their way to Domain Dry Cleaners.

Many of Australia’s leading performing arts companies such as Opera Australia and Melbourne Theatre Company trust John’s expertise in cleaning their elaborate costumes.

With numerous cast members on stage under hot lights, major musicals from Phantom of the Opera to the Lion King, also seek out Domain.

‘We did the Australian Ballet for 40 years. We pretty much do them all,’ John said.

‘There’s not much happening just now but we’re doing Harry Potter and the Cursed Child and Frozen, we do MTC, Malthouse, little and big companies, and we’ve done many international bands too.’

A second-generation family-run business, Domain Dry Cleaners has been at its South Yarra location for more than 40 years, ever since John’s father George opened its doors in the 1970s.

The City of Melbourne has recognised its contribution to the neighbourhood with a Lord Mayor’s Commendation.

John was 16 when he started work in the family business.

‘I didn’t think I was going to be here 40 years later. It is just myself and my wife Margaret and, while COVID-19 has given us a bit of a break, it comes at a price,’ he said.

‘I can’t employ anyone else because of the work I do, I don’t want to risk cutting corners.’

While it’s hard work, John has a warm and amusing approach when looking back over his accomplishments.

‘I break out in a sweat with some costumes. Aladdin was full-on – covered in beads, velvets, silks, that was challenging.’

‘Kylie Minogue’s dress – they wanted it the same day. It was fully pleated and I just had to shut the shop and dedicate my day to that.’

The shop has for many years been filled with tutus and gowns, military coats and feathered creations, and John has a rich store of memories and anecdotes.

‘Prince was good, back when he was super-huge in the ‘90s. I got along well with one of his people. I was there at every show and would pick up the clothes at the end and bring them back here,’ John said.

‘Aida – the opera with all the animals – when we did that the shop didn’t stop, we worked 24 hours a day.

‘Another show at the State Theatre was full of wedding dresses covered in fake blood. We had to get that out every day.

‘When (ice dancers) Torvill and Dean were touring the world, their costumes used to get sent to us, cleaned and sent back. It’s not a nine to five job.’

In his field, the deadlines won’t budge. ‘Often they don’t have a back-up costume so you can’t risk getting it wrong.’

Working just around the corner from the Royal Botanic Gardens, John has been at the centre of his neighbourhood for years.

‘I have my regulars and I like to have a chat on days when it’s not work, work, work. I love the people here, they’ve seen me grow from when I was a kid.’

‘The shops have changed a lot. There’s a real focus on restaurants. Back in the ‘60s it was more convenience stores and we had the butcher, the post office, grocery store, deli. We had everything here.

‘Now it’s more about getting a coffee or a meal. People can look out at the park and be seen. The way the street looks is very nice, really chilled.’

After 40 years, a local dry cleaner is still all about convenience, and John and Margaret know they can be counted on.

‘We’re not moving. Being here for 40 years makes me proud.’