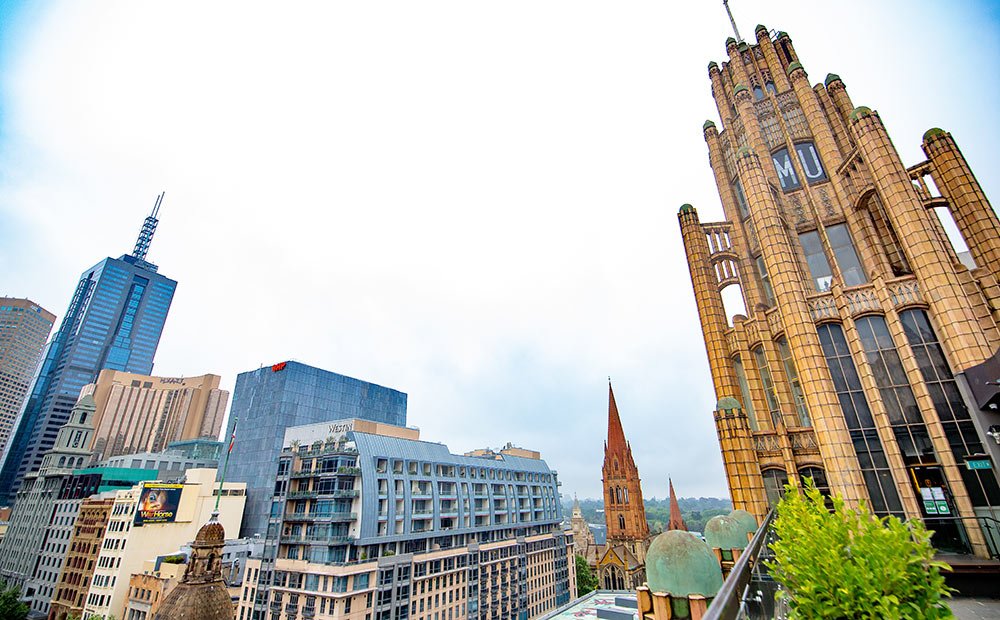 When an enchanting spire rose into the sky from a busy street corner during the Depression, it helped to lift the spirits of the city. It still has that power 90 years on.

‘Imagine tiling your bathroom, then imagine trying to tile a building like that. The whole façade is covered with tiles,’ City Architect Rob Adams AM said. That’s 400 tonnes of terracotta tiles.

This Modern Gothic edifice reached out of the depths of the Depression in 1932. It has graced the corner of Swanston and Collins streets ever since.

Commissioned by a friendly society – the International Order of Oddfellows – it took only eight months to be completed. A long line of tradespeople and labourers were keen to work around-the-clock on rolling eight-hour shifts.

‘They created jobs during a time of unemployment and uncertainty,’ Victorian Government Architect Jill Garner AM, a life fellow of the Australian Institute of Architects, said.

‘They committed to a building design that uplifted the spirit at a time of deprivation.’

Magic stairway to the mezzanine

‘Like each birthday of my own children, I celebrate this major milestone of a unique creation that continues to live and shine due to loving protection,’ owner Dr Kia Pajouhesh said.

A street corner that attracts attention

From the time she was a child, jeweller Camilla Gough has been ‘attracted to the magical architecture of the Manchester Unity building’.

‘It has always stood out to me. It’s so modern and hopeful, and such a prominent location. It soars up, not with heavy architecture like the Victorian buildings from the gold rush.’

After more than 25 years of running a small buisness in the city, Camilla is finally a tenant in the building.

‘And now I have this incredible view of the Town Hall from my studio,’ Camilla said.

Maybe there’s a subliminal reason Camilla’s creative soul was drawn to this corner as a child.

Jeweller Stewart Dawson once presided over the four-storey walk-up on the site, before the Manchester Unity building took its place.

For several decades in the early 1900s this spot was known as Stewart Dawson’s corner, according to author Robyn Annear’s illuminating book, A city lost and found. It rivalled the steps at Flinders Street Station as a meeting place for friends and lovers.

A beacon that shows we are not lost

Architect Marcus Barlow was inspired by the new architecture of Chicago. There, ground-breaking technology was transforming the skyline into a vertical city, Jill Garner AM said.

‘It helps navigation, it guides, and it reassures by showing us we are not lost.’

Built to the maximum height allowed in Melbourne at the time, Manchester Unity became one of the tallest buildings in the city. Its buttressed tower still speaks to the Town Hall clock across the road, and the nearby spire of St Pauls.

As well as wow-factor, this landmark building organically meets many of the standards outlined in the Central Melbourne Design Guide, according to Rob Adams AM.

‘Urban design guidelines nowadays talk about celebrating the corner. The Manchester Unity building is still one of the best examples, and it happened naturally,’ Rob said.

‘It’s much harder to build something beautiful and interesting that stands the test of time and adds to the character and global renown of Melbourne as a centre for design excellence,’ the Deputy Lord Mayor said.

‘We started our Design Excellence program because there were too many bland and boring buildings being built in our city,’ he said.

‘We want to help developers contribute buildings that leave a legacy and are built with high quality materials,’ the Deputy Lord Mayor said.

There are seven major projects this year on track to be approved with substantial input from the Melbourne Design Review Panel.

The Hoddle Grid Heritage Review has applied new heritage overlays to 121 individual places and five precincts in the Hoddle Grid.

‘We cannot bring back the Federal Hotel and Coffee Palace on Collins Street … or even the ornate Melbourne Fish Market which was demolished to make way for a car park on Flinders Street,’ the Deputy Lord Mayor said.

‘But the city is blessed to have preserved many of the wonderful buildings that led to the moniker “Marvelous Melbourne”.

‘By appropriately recognising more heritage buildings in our planning laws, we can ensure that we protect that for future generations.’