Streetscape design: the art beneath our feet 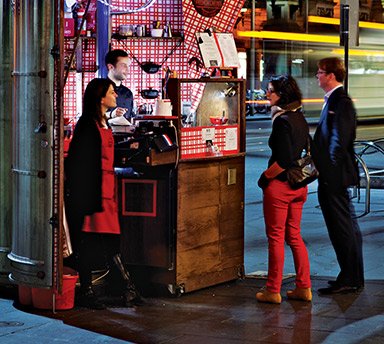 Melbourne’s reputation as a destination for art and culture extends far beyond its concert halls, galleries and even its famous laneway murals.

Design is everywhere, from street furniture to bluestone paving and public art, each element contributing to a distinct sense of place.

‘For many years our design team has thought of our streetscapes as a frame for the city, within which all the colourful activity and commerce that makes Melbourne tick can take place.

‘The frame should be attractive and complement the picture it holds, but not distract from or overwhelm the subject.’

In the early 1980s, councillors made a commitment to create an improved urban landscape, widening and activating footpaths to make the city more appealing and safe.

A key part of this was the incremental replacement of asphalt footpaths with basalt – widely known as bluestone. This hardy material from Victoria’s volcanic plains echoes Melbourne’s historic cobblestones.

The City of Melbourne’s systematic roll out of sawn bluestone saw its use expand from a few discreet street sections in 1985, to almost 80 per cent of the central city. Bluestone pavements are now one of Melbourne’s most defining features.

To complete the picture, the City of Melbourne also began designing its own street furniture, including benches, bins, drinking fountains, fruit and flower stands and tram stop shelters.

Materials and forms have been refined over the decades to create a harmonious backdrop that is easy to install, maintain and replicate. Today, Melbourne’s iconic designs are licensed for use across the globe.

‘Our key materials are stainless steel, aluminium, granite and bluestone. These materials are quality and easy to maintain, so paying a little more at the outset pays dividends down the track,’ said the Principal Industrial Designer.

‘We had to work with the times, evolving the tops of rubbish bins when smoking was banned indoors and converting newspaper pillars into trading cylinders.

‘Even our lights are just vessels, so we can insert new technology as it evolves.’

La Petite Crêperie has been trading from a converted newspaper pillar since 2012, serving crêpes in take away cones late into the evening.

Co-owner Patrizia Maselli said that staff and customers react to the tiny space with surprise and delight.

‘We get many passers-by who are often surprised by our presence, still in awe of how they have stumbled across a ‘mini French kitchen’ on a busy Melbourne street,’ Patrizia said.

‘It is a very small working space and it’s so accessible to our customers who are drawn to the aromas, sounds and theatre of our authentic French crêpes being cooked on demand.’