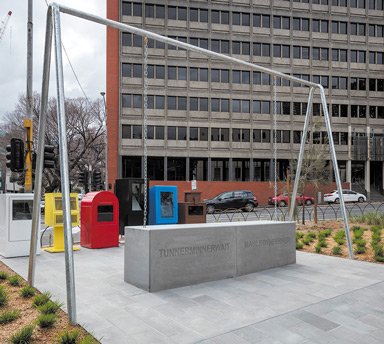 A new public art piece brings an affecting story of Melbourne’s past to our streets. In 1842 two Aboriginal men from Tasmania were executed near present day Franklin and Victoria streets.

Tunnerminnerwait and Maulboyheenner were hanged after being convicted of the murder of two whale hunters. Their story has much significance for Melbourne’s Aboriginal people. The City of Melbourne last year held an exhibition at City Gallery of contemporary artists’ responses to the story, and of designs shortlisted for the public art work.

Artists Brook Andrew and Trent Walter were chosen to create a marker, or contemporary reminder. With its native trees and colourful newspaper stands, the art work provides a place for reflection. The newspapers evoke history as it is recorded, amid the contested stories of colonisation.

‘It is painful to read accounts of their hanging, and the circumstances in which Tunnerminnerwait, Maulboyheenner, Pyterruner, Planobeena and Truganini found themselves in, but we need to face these histories to truly understand what is to be Australian,’ says Trent.

‘Standing by Tunnerminnerwait and Maulboyheenner’ is constructed from bluestone, plantings and powder-coated and stainless steel. Trent says it is designed as a permanent marker that ‘hopefully leads to more recognition of frontier conflict and its legacies in towns and capital cities across Australia’.