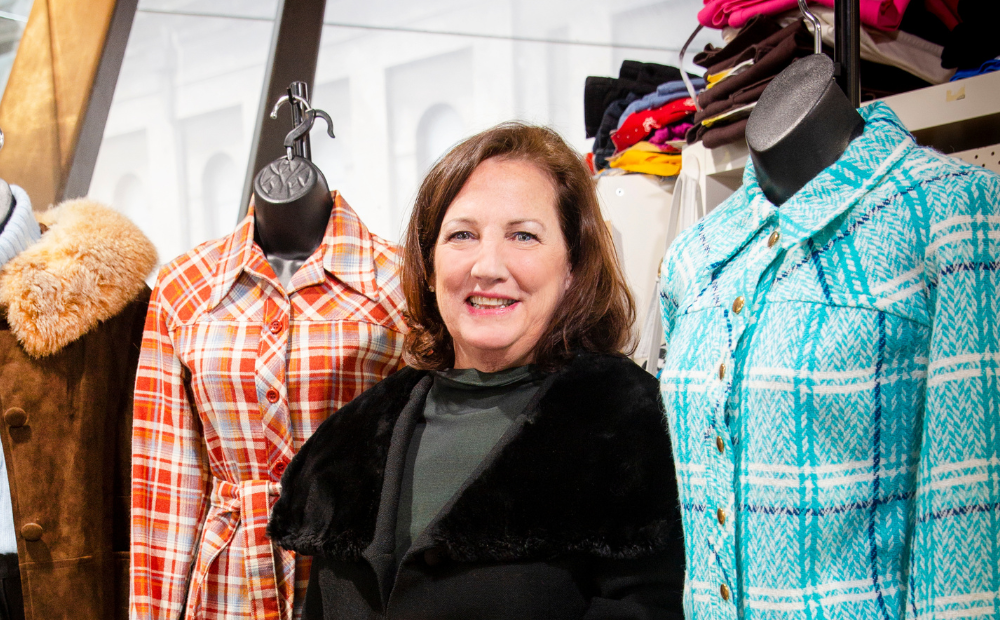 Meet the woman who’s been bringing vintage style to Melbourne streets for 30 years.

It took some fancy footwork for Eileen Carney to secure a tiny shopfront in the new Melbourne Central complex in the early 1990s.

People told her there was no market for second-hand clothes. And yet, having grown up in New Jersey where the vintage rag trade was emerging, Eileen trusted her instincts.

Vintage was still relatively hard to find in her new hometown, Melbourne. On a trip back to the US for the summer, a friend had asked her to bring some Levis home for her, and the idea for American Rag was born.

She had already made a name for herself in a high-flying career with international fashion houses such as Faberge, and was keen for a change of pace.

The new shopfront was tiny, but Eileen stacked the racks and shelves with America’s finest vintage: lovingly chosen Levis of all shapes and sizes. Outlandish coats. Party dresses straight from the 30s, 40s and 50s.

‘To me, the shop was the seventh wonder of the world,’ Eileen said.

American Rag’s concept store was an overnight success, appealing in particular to teenagers whose parents were dubious about the hand-me-down vibes.

Maybe that was part of the charm.

Soon, Eileen branched out to a bigger shopfront in the nascent Southgate complex, just as the city was turning its eye to the riverfront. Close to the arts precinct, the bigger shopfront gradually attracted a slightly older, more sophisticated cohort. American Rag stayed in place for 28 years.

And the American Rag shopfront that’s been setting the vintage agenda at QV Melbourne for more than 14 years sells up to 1000 pieces a month to trend-savvy customers.

More than 80 per cent of the wondrous garments in American Rag’s two venues are hand-chosen in the United States before they land in her full-to-the-brim warehouse.

‘Sustainability is the buzz now. The industry is much more competitive than it was. When I started, I would go through a 1000-pound bale of discarded women’s dresses to find 10 vintage pieces.’

Eileen estimates that American Rag has imported and rehomed some 300 tonnes of quality vintage gear. That’s millions of pre-loved garments, adding colour and cool to Melbourne’s streets over the past three decades.

‘Everything in my shops is good quality. And if there’s something wrong with it, we’ve created a whole sub-industry of people who do repairs, alterations and laundry to keep the shop stocked with quality garments.’

We recently recognised Eileen’s lasting success with a Small Business Achievement Award. She’s in good company with many other beloved city businesses that have been in operation for 20+ years.

‘If you’d told me 30 years ago I’d be in business 30 years later I would have said “get out”, but I am. And it’s still a very pleasurable business,’ Eileen said.

‘Part of the success of American Rag is that the City of Melbourne delivers such a broad array of customers. Tourism, people who come from interstate and overseas. People who live in the city. Students. That is not available anywhere else.’

‘To keep a business like American Rag successful, you need to have that diversity of customers. City of Melbourne is part of that story, it runs a great program. All the initiatives to get people back into the city after lockdowns have been spectacular,’ Eileen said.

‘This award is a symbol of a partnership.’