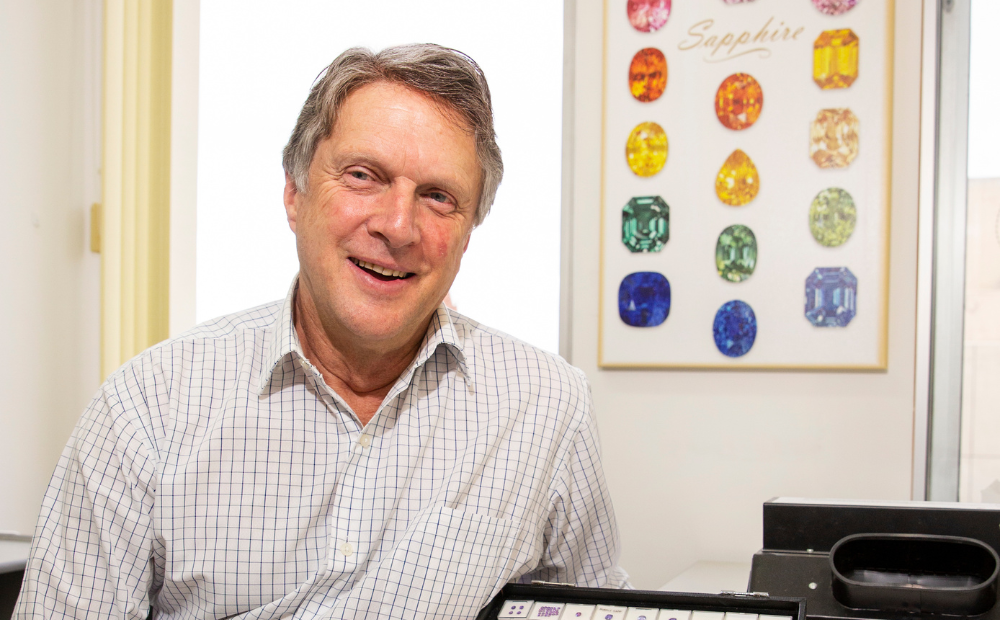 Casim Abdul Hamid arrived in Australia from Sri Lanka with a parcel of gemstones in 1898. More than 120 years later, his family business is going strong.

For three generations, Hamid Bros has supplied jewellers with all colours of ruby, emerald, sapphire and many other gem varieties. We’ve recognised this lasting success with a Small Business Achievement Award.

Casim’s grandson Grant Hamid is now the sole owner of the business, following the passing of his father George Hamid (who established the company’s CBD office in the 1960s) and his sister’s retirement.

‘I joined the family business in 1975 and I still get a thrill finding beautiful gems,’ Grant said.

‘Every gem is unique – in colour, brilliance and style of cutting. With all these factors, you’ll never find two exactly the same.’

‘Every jeweller should know about gemmology and the industry runs great training programs to pass on these skills, however unfortunately student numbers aren’t as high as they once were.’

Relationships have been critical to the Hamids’ business success over the years, both locally and internationally, in places like Sri Lanka, India and Thailand.

‘Family connections are strong in the jewellery industry. We deal with a lot of businesses that have been passed down through the generations,’ Grant said.

‘There are suppliers in Bangkok and India where my father dealt with their father, and I’ve been dealing with the sons ever since.’

As the jewellery industry has evolved, Hamid Bros has too. At the moment, synthetic gems are popular, but Grant warns there’s nothing better than the real deal.

‘Synthetic diamonds are a big thing right now, however they will become cheaper and cheaper to make, so they will no longer have a uniqueness factor. In 10 years time, a jeweller might add a synthetic gem to a ring for free.

‘There’s nothing individual about a synthetic jewel – they are reproduced in a laboratory where they make thousands of them at a time. Genuine coloured gems are rare and, of course, a finite resource.’

During the pandemic, Grant felt fortunate that Hamid Bros continued to thrive, and he hopes the business will continue to do so long into the future.

‘In recent years, people haven’t been spending money on travel or entertainment, but they’ve still celebrated birthdays and anniversaries, so thankfully the demand for beautiful gems was still here,’ Grant said.

‘We also got great support from the government and the City of Melbourne during the lockdowns.’

As someone who loves working in central Melbourne, Grant was delighted when his business was recognised in the city’s small business awards program.

‘Melbourne city is magnificent. I’ve been to so many major cities throughout the world and Melbourne is the only one I’d ever live in,’ Grant said.

‘While other cities might have great food, culture or theatre, Melbourne has got all of those things and more, and you can even walk to major sporting precincts from the CBD. For me, that’s what sets it apart.’

To find out more about Grant’s business, visit Hamid Bros.

Camilla Gough is one of the local artisan jewellers who sources gems from Hamid Bros. To see what she does with the beautiful stones, visit Made with love: honours for jeweller Camilla Gough.